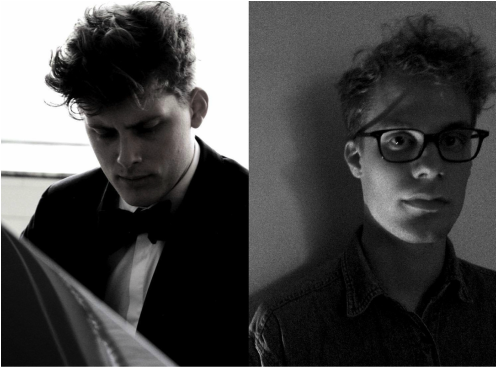 The collaboration between the classical pianist Oscar Micaelsson and the sound artist Jonatan Nästesjö sees two creative musicians exploring new spaces where delicate pieces of acoustic piano and experimental electronic treatments meet and interact. Coming from different backgrounds, there’s an openness to their collaboration, a meeting of equals where anything can happen.

​Jonatan Nästesjö is a Sweden based musician and sound artist. Since 2007, he has actively been touring in Europe, The UK and Scandinavia. His works are highly melodious, ambient and droning, sometimes dubbed “cathedral electronic music”. More precisely, he uses guitar and electronics to explore different sources of sounds, fostering a conceptual approach to song craft which is anything but sterile computer language.

Nästesjö’s debut album “Leaves never leave” (released in 2007 and re-released in 2009) was highly acclaimed and earned him ‘Digfi’s artist of the year’ awards. In 2012 his EP “Wait For Me” was released on the influential label Hibernate Recordings, and in 2013 he released his second full-length album “Below” on Soundscaping Records, a collaboration with his close friend David Wenngren (aka Library Tapes). Nästesjö has also made music for numerous art installations and video projects.

Born in October 1990, Oscar Micaelsson recently finished his masters degree as a pianist at the Royal Danish Academy of Music in Copenhagen. Studying under the likes of Deborah Wood, Søren Rastogi and Jay Gottlieb, Micaelsson developed a multifaceted artistry, covering anything from classical and contemporary piano music to jazz and improvisation. In 2014 he was awarded the Leonie Sonning grant for young upcoming artists. Since 2014, Micaelsson is a part of the contemporary ensemble EKKOZONE. They have recorded and performed works by Steve Reich and others at venues like Roskilde Music Festival, Jazzhouse Copenhagen, and Tivoli Concert Hall. In January 2016, Oscar was invited to perform in Mariinsky theater in St. Petersburg. The same year, he was also invited as a guest pianist in Pittsburgh New Music Ensemble at their annual summer program.